Daisy Miller
Henry James
Daisy Miller is a text for my *final* Bachelor of Arts unit, American Literature. As such, I wasn’t too excited to read it, but it was necessary. It was a very short read, around an hour (possibly less), so it’s an easy investment if you like the Classics. 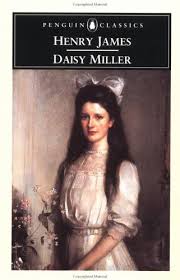 Henry James is a well-known American writer that all classics readers should know of. He reminds me a bit of Irish literature actually – simply due to the writing style and his name. Oh yes, that would be my brain telling me James Joyce is similar, but of course, the two styles are not identical and they have different focuses.
The characterisation and narration of this novel are what add interest. The whole point of the novel is that the main character, Winterbourne, filters the reader’s perception of Daisy Miller. Daisy is an enigma – is she a simple flirt, or is she something else?
Above all, this novel is a tragedy, although the reader does not necessarily feel that way about Daisy entirely. It’s whether you feel that she had the end coming to her or not. References to going to and coming from are rife throughout the text.
In the preface/introduction to my version, the editor complains about the changes between the two editions, one which James revised and one which was the original. Interestingly enough, this novel was also adapted as a play, although that was apparently very unsuccessful.
As with any Arts text, it wasn’t enthralling. At least this one wasn’t too painful though. Let me get back to you on that once I’ve written the essay…